Furore and Fiordo of Furore in Amalfi Coast

Fiordo of Furore, a corner of paradise just a short walk from the Farmhouse Serafina

Farmhouse Serafina near the Fiordo of Furore: a name that instantly explains the vigorous and fascinating nature of the Amalfi Coast. From the bridge of the road 163 Amalfi Coast, suspended between two imposing rock, you can enjoy a spectacular view of the beach of Furore with the ancient fishing village, set of the movie directed by Roberto Rossellini, “Love” with Anna Magnani. The Fiordo, is the location of the Mediterranean Cup, as part of the Event Marmeeting, the Championship of Diving from Great Heights that attracts athletes from around the world. The Fiordo of Furore is easily accessible from the Farmhouse Serafina, which in addition to the pleasure of being surrounded by nature and rural life near the sea, also gives the possibility of beautiful excursions in the neighborhood, walk along the age-old mule tracks, today famous trekking paths around the world.

From Furore to Positano, from Amalfi to Ravello. Here are some wonderful pearls to visit your stay at the Farmhouse Serafina

Furore is a characteristic town of the Amalfi Coast known for Fiordo of Furore, breathtaking landscapes, mild climate, beautiful paths.

In addition to the serene life of the Farmhouse Serafina, you can “sunbathing” and walks through valleys in the area, starting from Farmhouse Serafina can start a sort of trail to the places of artistic and cultural heritage of the Amalfi Coast. Furore, one of the “painted towns” most beautiful in Italy, a land of extraordinary wines Doc, welcomes you with its lively murals along the road that goes through the village. Furore: where the sea screaming wedged between the limestone of the coast and the mediterranean little houses, the sets of one of the most fascinating cinema where Roberto Rossellini filmed “The Miracle” with Anna Magnani.

Amalfi, the ancient maritime republic keeps intact the charm of its long history, alleys, streets, in its churches and traditions:

Historical Regatta, held every four years, alternately in each of the Ancient Maritime Republics, the Byzantine New Year, an event that traces the glories of Ancient Duchy with the parade with costumes, the festivities in honor of the Patron Saint , St. Andrew, the Museum of the Duchy of Amalfi by the ancient medieval arsenals, the Cathedral, the Diocesan Museum and the Cloister of Paradise, the Museum of Amalfi paper in an old paper mill restored, the sun-kissed beaches are just some of the attractions of this town a short drive away from the Farmhouse Serafina (6 km) 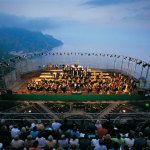 Ravello, rival in the centuries of rich Republic of Amalfi (15 km)

Retains its medieval treasures, art and culture in its beautiful villas overlooking the coast, the charming gardens that have fascinated Wagner, to became background of the composition of “Parsifal”. The Cathedral, the Museum and the ancient monasteries are guardians of its historical and religious treasures. Every year on repeats the festival of Classical Music at the gardens of the Villa Rufolo and at “Auditorium Oscar Niemeyer,” where at the end of music festival, starts the film season. Give yourselves a blast from the past from the Farmhouse Serafina

Positano the most fashionable town of the Amalfi Coast, the favorite from the international jet set, from the VIP Watching lovers, Fashion Positano that enlivens its beautiful alleys smelling of Zagare. Magnificent beaches: Marina Grande and Fornillo, within walking distance from a romantic and characteristic path that runs along a stretch of coast overlooking the sea.